Rocket Delighted to be Associated with Award-Winning Exhibition Stands 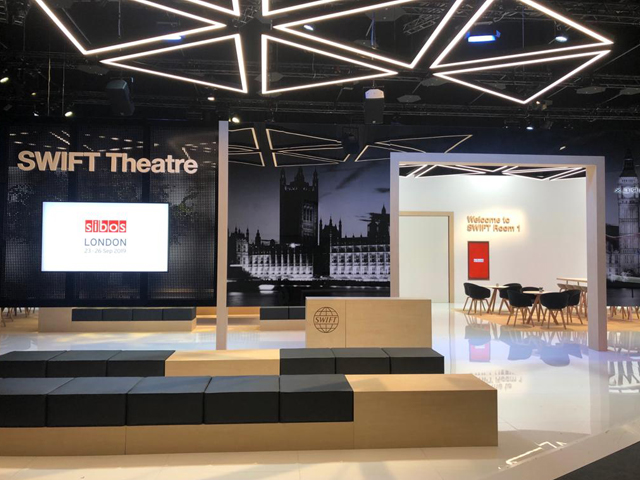 Attending exhibitions and trade shows in person may be off-limits for now, but at Rocket, we’re extremely proud to have been associated with a number of superb stands which scooped top wins in the recently announced World Exhibition Stand Awards for 2020.

The scheme celebrates the very best in exhibition graphics internationally, across a range of events and organisations.

Of course, as primarily a large format print and graphics firm, we can’t take any credit for the creative design behind any of the award successes. However, in working with many of the winners, we produced and installed all the graphics and signage for the stands, playing a key role in the finished products.

SWIFT facilitates financial transactions, and it won Platinum in its category, Best Stand Over 1,000sqm at Sibos 2019, the premier international financial event, held in London’s ExCeL venue in September 2019. It also took Platinum in the Best Stand at a Finance Event section.

Working with our client Rapier Group, we produced and installed the graphics for this installation, which incorporated clever use of lighting with geometric shapes, using fret-cut 3D lettering and illuminated 3D hanging signage alongside TFS backdrops and living greenery to create a vibrant effect.

It was fantastic working with Rapier Group on this project, and we look forward to working with them again on more exciting projects in the future.

Again working with Rapier Group, we helped this leading global defence brand win Gold in the same category mentioned above for its presence at DSEI (Defence and Security Equipment International) 2019, the arms fair held every two years in London’s Docklands. At the same time, it took Gold for Best Reusable Stand.

The double-deck 1,118sqm space aimed to set BAE apart from the competition while shifting the perception of the brand away from tech and engineering-focused towards a more service-oriented, approachable organisation which worked collaboratively.

There was also an extensive effort to take a holistic approach, creating a product for DSEI which could be used across BAE’s global schedule of exhibitions.

The company’s identity was made clear on arrival, with clear signage and BAE’s brand story comprehensively told. There was a central walkway as visitors were taken from the organisation’s key capabilities (e.g. air and sea) to particular products and features.

This won Gold for its presence at Sibos 2019, in the Best Stand 49 – 100sqm category. The idea here was to create a fully immersive experience emphasising the brand’s core message of ‘a frictionless future’. Video, animation and enticing architecture took visitors right inside the story of this Mastercard company and encouraged them to talk to team members. Cosy furniture and natural-looked materials helped create a welcoming environment.

As it was the first time it had exhibited at Sibos, the brand was particularly keen to distinguish itself from competitors’ exhibition stands.

This was achieved through a virtual reality experience, interactive hospitality bar and podcast library to combine a strong narrative with engaging experiences. But the stand-out feature was a panoramic video screen hung over the stand, which used content to bring the story of ‘a frictionless future’ to life with as much impact as possible.

This entry took Platinum in the Best Use of Technology category for its presence at the Mobile World Congress Show in Barcelona in 2019, and we worked in the project with agency 2LK Design.

The particular challenge for this stand was the communication of 5G, an intangible technology, in a setting where people’s time and attention are limited, and the fight to be heard is a tough one.

Intel’s complex tech was conveyed through dynamic, powerful storytelling and huge maps via a multimedia device with physical and digital design, including focused lighting and an immersive soundscape, showing how the technology affected daily life.

UTC took Platinum for Best Stand at an Aviation Event, after exhibiting at the Paris Air Show in June 2019, working with agency RTH plc. It also won Gold in the Best Use of Technology category.

Collins Aerospace and Pratt & Whitney, parts of UTC, were with UTC at the event, so the client needed to showcase three distinct brands. The result was a 600sqm pavilion and a museum-style interior, including a full-scale jet engine and a floor-to-ceiling LED screen pillar.

The final product was interactive, striking and functional while being robust enough to stay looking superb for the full week of the show.

Finally, Google Android’s presence at the Mobile World Congress 2019, called Android Avenue and put on in collaboration with the agency Brandfuel for the eighth year, took Gold for Best Use of Technology. It also scooped a Platinum title for Best Stand at a Technology Event for its efforts.

Android Avenue is described as ‘a semi-surreal urban space’ involving familiar-looking structures ranging from a coffee shop to an art gallery along a pop-up street, themed on Google and Android’s design language.

Nearly 68% of the event’s 109,000 visitors took a stroll down Android Avenue, which had to be weatherproof and was the length of two football pitches.

Other stands which scooped accolades for our clients include SWIFT Discover’s, which took Diamond in the Best Feature Area category for its efforts at top financial services event Sibos – again this was with the Rapier Group agency.

At Rocket, we look forward to continuing our partnerships working on superb exhibition presences as soon as these events resume. Meanwhile, we’re very busy with signage for social distancing in workplaces and elsewhere.

Talk to us today about what you need.